Garnets are the birthstone for those born in January. It is also known as the gemstone for the second anniversary. People tend to think of garnets as being very deep red, but they are actually found in a wide color spectrum. In fact they are found in all colors except blue. Anyone who loves the sun baked colors of late summer will be attracted to this lovely stone. 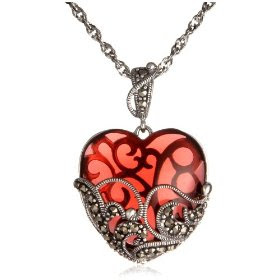 Garnets are mined worldwide with many mines found in Madagascar, India, Brazil, the US, , and other locations. Unfortunately, not all garnets which are mined are good enough quality to use in jewelry.

The word garnet comes from the Latin word granatus. In nature, garnet crystals which were embedded in rock often had the color and shape of pomegranate seeds.

Garnets have been known to Man for thousands of years. It is even said that Noah used a garnet lantern to help him steer the ark through the dark night. Early Egyptian, Greek and Roman times all have evidence of jewelry made from this beautiful gemstone.
Share

Back to the top